Chyawanaprash is an inspiring formulation. Since its known inception dating back to 1500 BC to the present age, it has remained one of the most popular and well known ayurvedic formulations. Chyawanaprash manifests the entire human quest for immortality and freedom from disease and prevention of ageing. The formulation as a whole is an expression of a blessing from the Rigveda `jeevema shardah shatam´.
The word Chywanaprash is composed of two words chyawana and prasha. The former, stands for the name of a sage and prasha denotes a drug or diet which is suitable for ingestion. Chyawanaprash is outstanding and Charaka has listed it among the foremost formulations listed in chapter one of the Chikitsasthana.

Chyawanaprash is the superior of all rasayana formulations. Rasayana is the seventh branch of Ayurveda which deals with the prevention of aging, disease and minimization of degenerative processes and aiming to prolong life. It covers the three modern medical branches of immunology, metabolism and endocrinology.
Directions for use: Take 1-2tsp daily, followed by warm water/milk/ herbal tea

Benefits and uses:
• Preserves youth and slows down ageing
• counters debilitating and ageing disorders
• strengthens the immune system
• excellent rejuvenator for body and mind
• it purifies and develops the seven body tissues (dhatus)
• best all round elixir

Mythology of Chyawanaprash
According to Mahabharata
Puloma the wife of Bhrigu was at home by herself when a monster entered the heritage and tried to ravish her. Puloma was pregnant at that time and out of fear and anxiety, she aborted and the baby boy was born prematurely. He was named Chyawana and due to the premature birth, he was physically very weak. In his later life he was getting married to King Sharyatis´ young and beautiful daughter Sunkanya. Sometime after the marriage, the Ashwini twins offered him a medicine to regain his youth so he could be happy with his young beautiful wife Sunkanya. After taking the medicine Chyawana regained his youth and the formulation was named Chyawanaprash after the name of Chyawana. 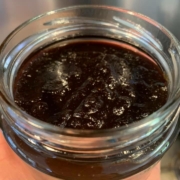 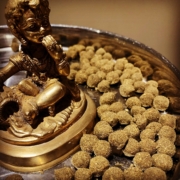 The Wonders of Amalaki

News – Ayurveda products at your doorstep ….

Lakshmi’s clinic will be open over the Christmas period. 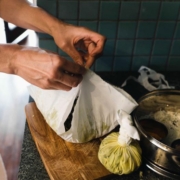