You are here: Home / Blog / Shirodhara 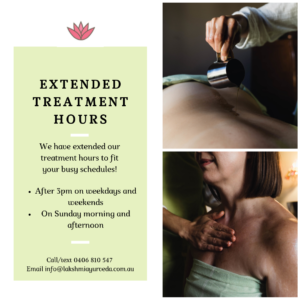 We have extended our treatment hours at Lakshmi Ayurveda!

Appointments available on Sundays and after 3pm on the weekdays to better suit your schedule.

Have you experienced a Shirodhara treatment?

Shirodhara is by far the most iconic treatment of Ayurveda. It is considered the King of all treatments, as it treats a wide variety of conditions in Ayurvedic clinical practice.

The name Shirodhara, comes from the two Sanskrit words Shiras meaning ‘head’ and Dhara meaning ‘to pour’. This deeply relaxing and nurturing treatment involves the continuous pouring of warm medicated oil over the forehead, using a pot with a tap that controls the flow of oil. The oil is gently poured from side to side across the forehead, at times resting over the midpoint of the forehead.

END_OF_DOCUMENT_TOKEN_TO_BE_REPLACED

What an amazing week we had at Lakshmi Ayurveda’s first Abhyanga and shirodhara therapist training course. Congratulations to all the wonderful participants learning these ancient healing therapies. Our participants brought so much knowledge with them which made it an incredible week of sharing 🙂

With love the Lakshmi Ayurveda team 🌼

PS: our next course dates will be released soon. More course pictures and videos will follow soon.
We wish you a beautiful Sunday

Book your treatment between 18th- 30th of June and get a $20 discount.

For bookings or enquiries please call Karin: 0406810547 or email: info@lakshmiayurveda.com.au

Well I was in heaven with my treatment yesterday, thank you so much. I didnt realise how special the Shirodhara is. Ala

Parkinson’s is a degenerative disorder of the central nervous system that often impairs the sufferers motor skills, speech and other functions. It belongs to a group of conditions called movement disorders and it develops from a loss of dopamine producing cells.

Parkinson’s distinct triad of symptoms are

In Ayurveda Parkinson’s disease known as Kampavata or Vephatu and is considered to be a Vataja nanatmaja Vyadhi (diease of Vata). Kampavata can be translated as tremors due to Vata.

Pizhichil (pouring medicated oil in a specific manner over the body)

Thalam (applying medicines over the centre of the head)

For more information or interest in a consultation please email: info@lakshmiayurveda.com.au

Many wonderful events are planned for 2012. In April my beloved teacher and leading Ayurvedic physician Dr Mahadevan is coming to Australia for an educational seminar/ workshop. The event will be held at either Lakshmi Ayurveda or the Sivananda Ashram/ Beacon Yoga Center in Beaconsfield. For enquiries or expression of interest please contact Karin ph: 0406810547 email: info@lakshmiayurveda.com.au

Lakshmi Ayurveda wishing you all the happiness of the season and peace and prosperity in the New Year.