Blog - Latest News
You are here: Home1 / Treatments2 / Parkinson’s and how Ayurveda can help

Parkinson’s is a degenerative disorder of the central nervous system that often impairs the sufferers motor skills, speech and other functions. It belongs to a group of conditions called movement disorders and it develops from a loss of dopamine producing cells.

Parkinson’s distinct triad of symptoms are

In Ayurveda Parkinson’s disease known as Kampavata or Vephatu and is considered to be a Vataja nanatmaja Vyadhi (diease of Vata). Kampavata can be translated as tremors due to Vata.

Pizhichil (pouring medicated oil in a specific manner over the body)

Thalam (applying medicines over the centre of the head)

For more information or interest in a consultation please email: info@lakshmiayurveda.com.au 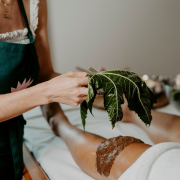 The Gift of Health for Christmas 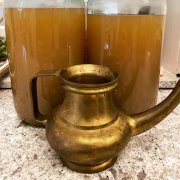 Day 8 our Dhanyamla is ready for your treatment. 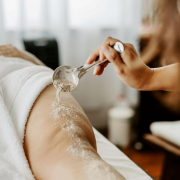 Lakshmi Ayurveda will be closed from Monday 8th of September to Wednesday 1st of October.

Ankylosing Spondylitis (AS) and Ayurveda.

Care of the Newborn Baby and Infant Massage
0 replies